I spent last night in the emergency room. On my list of things to do during the last week of school, this ranks far down towards the end, perhaps just above “give my kindergarteners espresso.”

First, some background. With my medication, I’m nearly always experiencing some form of nausea or loss of appetite. I’ll eat very little at a few meals, unable to choke down foods I previously loved; then I’ll be hungry a few meals later and try to eat as much as I can to take advantage of that window of opportunity. I have to eat even when I don’t feel like eating, which for anyone who has experienced it before, is a complicated issue. I’ve had people comment to me, “I’d love to have that problem!” or “It must be nice to feel like you can lose some weight.” These statements are really hard to hear. If I had my choice, I’d rather feel strong and healthy over sick and skinny, desmoid tumor or not. I suppose the “weight loss” impact might seem appealing, but without nutrition, my body doesn’t have the fuel it needs, which is exactly what happened this week.

At times my nausea is improved by eating (counterintuitive, I know) or at least subsides after a little food and a lot of rest. I spent Sunday laying low in my apartment: I did not feel great upon waking, but I managed to eat some oatmeal by the early afternoon, took a nap, finished a book, and felt better. On Monday, little appealed to me at lunch, but I made one of my go-to dinners: a falafel wrap with spinach, cucumber, tomato, and goddess dressing. I got to bed a bit early and decided I’d discuss the nausea with my oncologist the next day at my monthly appointment.

I never got to that appointment, because I was soon experiencing what I assumed as Stomach Virus Number Three of the past 30 days. I sent a text to my sister Jenna, who was scheduled to attend the appointment with me and is currently in nursing school. When it was clear that the virus was not letting up, she and my mom drove up to my apartment in the early hours of the morning. (I’ve said it before and I’ll say it again: my family is the greatest.) They took turns caring for me for the ten hours I was actively sick, looked after my super confused and anxious dog, and tried to catch some sleep ON THE FLOOR and on my couch. (Seriously, who does that? I can’t say enough how lucky I am.) When I was well enough to be in the car, they brought me to my parents’ house.

For two days, I had the ultimate recovery fake-out. I’d be fine during the day, eat a piece of toast and drink Gatorade, and send an email to my boss saying “should be good for tomorrow!”, only to end up sick that night. Finally, my oncologist’s office offered to get me a spot sometime the next day for an infusion of fluids and anti-nausea medication. They called in an oral anti-nausea medication and an anti-spasm prescription for my stomach cramping. But when I couldn’t even keep that down, my Mom went into “Mama Bear” mode and gently, yet insistently, offered to take me to the ER. We have an agreement: both of us always respect the other’s choices, but there will be times when we can straight up insist on having the final call. I knew I was in no place to make decisions about my care, so she googled which emergency room had the shortest wait, and off we went.

So, that’s how I ended up hooked up to an IV bag with fluids to hydrate me, anti-nausea to ease my belly, and morphine to take the edge off the pain. I finally felt some of the relief I deeply craved, and I remarked to my mom that it was the best choice I’d made in days.

Shortly before I was discharged, I would discover the full truth of that statement. One of the attending nurses on duty walked in and introduced herself. She had read about my medical history and said she had to meet me. Why? She herself had a desmoid tumor. I was floored and blinked twice to make sure this story wasn’t crafted by the morphine I’d been administered. As she worked on my discharge paperwork, she shared with me about her diagnosis, her surgery, and about her life five years later without a recurrence. Having only met one other Desmoid Tumor patient before (hi, Dakota!), this unscheduled and unorchestrated meeting was completely out of left field – and confirmed my belief that the ER was the best choice.

What’s next? Good question. I don’t really know. I’ve got another appointment with my doctor to discuss changing my medication. Since my white blood cell count was good on my latest labwork, it could be that these bouts are not actually stomach viruses, but a side effect of my medication. My oncologist advised me to stay off my medication until we can discuss it in more depth.

For now, I’m happy to be back on the couch with Fixer Upper reruns, water to drink, and slices of banana to snack on when I feel up to it. It’s been a wacky week, but as I’m continually reminded, living with this diagnosis means nothing that ever goes according to plan.

6 thoughts on “An ER Visit and a Chance Meeting”

I’m an educator, actor, and accidental rare cancer activist. In February 2018, I was diagnosed with Desmoid-Type Fibromatosis, a rare soft tissue sarcoma. I’m here to share about my adventures, increase awareness, and connect with other patients. 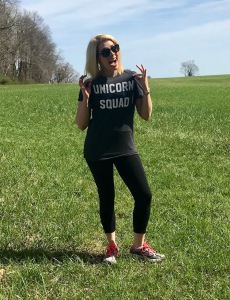 Join me and the Unicorn Squad at the 2019 Running for Answers 5K Sunday, September 22 in Philadelphia! Can’t join, but still want to participate? You can sign up to be a virtual runner or donate! Details and more can be found on our fundraising page.